Posted by Communications on 25 November 2022 | Comments

The abuse and intimidation of councillors must end – that’s the call from Babergh and Mid Suffolk District Councils amid rising concerns about toxicity in public and political discourse.

Both councils have agreed motions this week stating a zero-tolerance approach, after new figures showed around 70% of councillors nationwide have faced abuse in the last year.

The councils say increasing levels of abuse, particularly online, is having a detrimental impact on local democracy – and that ‘normalisation’ of such attacks must be challenged.

A series of measures have now been agreed, with both authorities supporting the Local Government Association’s Debate Not Hate campaign.

Constructive challenge, debate and the right to object is all a welcome and healthy part of democracy. But the toxic behaviour of individuals which crosses into abuse, harassment and intimidation is simply unacceptable.”

Councillors should feel safe to carry out their duties and represent residents. But such toxic abuse can deter people from doing that, and that is a threat to both local and national democracy.”

The agreed motion urges the Government to work with the LGA to develop and implement a plan to address abuse and intimidation of politicians.

The councils’ stance also says there should be work with the police to ensure there is a clear mechanism for reporting threats and other concerns about the safety of councillors and their families.

It calls for a zero-tolerance approach to the abuse of councillors and officers, and will urge local MPs to support the Debate Not Hate campaign.

The LGA campaign aims to raise public awareness of the role of councillors in local communities, encourage healthy debate and improve the response to and support for local politicians facing abuse and intimidation.

Its recommendations include calling on social media companies and internet service providers to “acknowledge the democratic significance of local politicians and provide better and faster routes for councillors reporting abuse and misinformation online.” 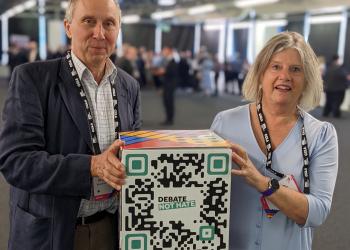